Never has The Waiting Room seen quite so a colourful collection of hipsters than at the VAMP short film launch.

There has been much hype around the concept film created by film director Jade Mulvaney and, owner of the Vamp Line, Nicci Saint Bruce. 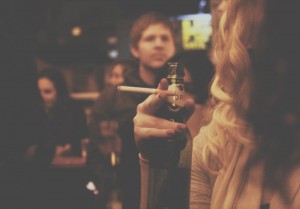 The behind-the-scenes video gave an idea of what was to come and the fact that The Waiting Room was filled to beyond capacity on Monday night was an indication that people had taken the bait and… they wanted more.

The theme of the night was leopard print, opulent fabrics, sky-high heels and dark makeup. There was a heavy flow of a number of our favourite amber liquids.

Come show time attendees huddled together, eager to get a good spot. Saint Bruce and Mulvaney each gave a short speech before the film was shown.

The Film, though it may be short, certainly showcases Mulvaney’s extraordinary directing skills as well as Saint Bruce’s gothic-style clothing and jewellery lines. In the film, scantily-clad cult members are captured in a trance as they prepare to “off” one of their own. As the energy climaxes a golden-haired stranger frees the captive and a chase ensues. The musical score really brings the tension together in a short film full of great shots, intensity and pretty faces.

The response was more than positive and as the video looped the audience couldn’t take their eyes off the screen.