One of music’s biggest breakthrough artists, 21-year-old George Ezra will be touring South Africa at the end of August 2015. The unassuming, folk singer from Hertford, England that has taken the world by  storm, will be performing live at the Durban Shongweni Polo Club on the 28th of August, at Durbanville Racecourse in Cape Town on the 29th of August and outdoors at Carnival City in Johannesburg on the 30th of August.

With his boyish looks, signature soulful and deep voice, George Ezra has gone from being a relatively unknown artist to a global music phenomenon in 2014. With a top 10 single in 11 countries and his #1 Album, Wanted on Voyage, already basking in world-wide success, Ezra has been marking a trail of sold out shows across the globe.

George (or “Geoff” as he is known to some of his bigger fans) was nominated for four prestigious Brit Awards, including Best Male Artist and Best British Album in 2014 and his debut album, Wanted on Voyage, has since gone double platinum in the UK and both its lead singles, “Budapest” and “Blame It On Me”, charted in the top 10.

With over 2.5 million single sales, 105 million views on Youtube and over 235 million streams on Spotify, South African audiences will be treated to one of the biggest rising stars in music today when this massive talent hits our shores this August.

Tickets on sale Tuesday, 28 April at 10am via our ticket office at www.weareseed.co.za 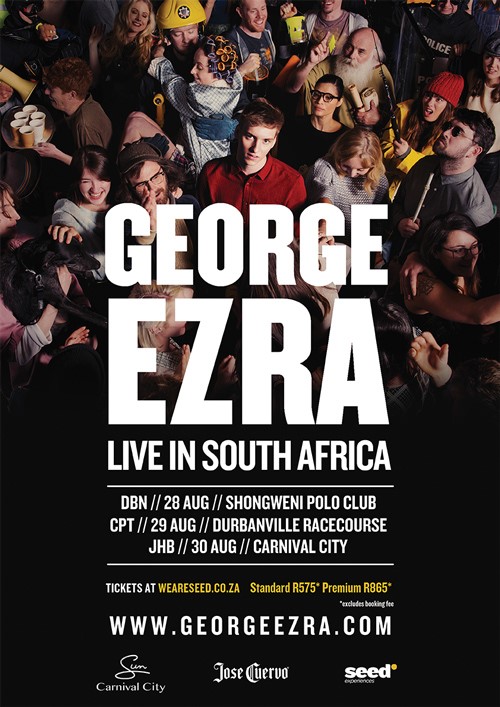 Tickets on Sale Tuesday, 28 April @ 10am via www.weareseed.co.za