The Kaggen Music and Film Trust is planning a series of diverse, multi-faceted events in Cape Town in 2016.  Woodstock Live is about establishing an environment of creative expression and engagement through spontaneous and meaningful cultural conversations and innovative ideas to promote artistic integrity and fearlessness.

Various socially-focused music events consisting of a series of multi genre park festivals, a tea party for the elderly and a music festival for children will be staged at Trafalgar Park, District 6, Woodstock, throughout the year.

The Woodstock Live brand is inviting Cape Town communities and neighbourhoods to connect with each other through these events.

The first Woodstock Live music concert will be held on Sunday 20 March.

The line up includes the following popular South African artists, who all in their own way, have fascinating stories to tell in terms of their musical journeys:

GoodLuck is one of South Africa`s most successful live electronic bands. Their music is an irresistible blend of electronica, pop and subtle influences of jazz. GoodLuck pushes boundaries with their unconventional approach to music and created a sound that is thoroughly their own. They have been taking this sound to audiences across Europe, Africa and the UK over the past three years and have had major radio success with various strong singles up to date. They have shared stages with Groove Armada, Bassment Jaxx, The Petshop Boys, Goldfish and Paul Oakenfold to name a few.  They have also performed at sold out concerts in Amsterdam, Berlin and London.

As one of the biggest DJ`s in South Africa, Das Kapital regularly headlines both festivals and club nights across the country, bringing a party vibe allied with his excellent technical skills. His is known for the brilliance of his DJ sets and an ability to read a crowd, to whom he transmits the infectious energy of his performances. This forceful pioneer in electro knows no musical limits, exploring the endless ways in which sounds can be combined – bringing brand new experiences of musical bliss with each set.  “This ambitious tastemaker increasingly has his eye on the international market and wants to help South African musicians realise their potential.” – Destiny Magazine Top 40 South Africans November 2015.

Tresor brings a new pop sound, moulded in Africa, for the world to enjoy. Born in Congo, he moved to SA to pursue his music career. The journey started with him being a car guard in Durban. Seven years later he is now signed to Sony and also has a global deal with Ultra Music. Tresor has collaborated with Beatenberg and The Kiffness and performed alongside Eddie Grant, Freshlyground, Ladysmith Black Mambazo, Just Jinjer and Johnny Clegg to name a few. His debut album “VII” was released in September 2015.

In an age of the over-hype and mass manufacture of sounds, Mix n Blend brings a fresh groove of sonic originality. Hailing from the sound-soacked streets of Cape Town and needing no introduction, the double SAMA nominated duo has been giving electro boogie lovers a reason to throw their hands in the air and dance like no one is watching since 2001. They deliver an array of musical experiences, from easy skanking reggae rhythms to hip hop, fierce funk and tearing drum n bass beats. One thing is for sure – each track is designed to ensure maximum dance floor enjoyement and participation.

Los Tacos is a 10 piece, up – tempo Latino Fusion band which sings and raps exclusively in Spanish. Brewing together the edgier parts of hip hop, psych-rock and ska, Los Tacos have an electrifying sound that is all about the fiesta! The frontman Jeronimo de Los Rios, is a Colombian born and raised artist. Their music is a mix of originals and South American covers – fun, sexy, Latino grooves keep everyone dancing all night. With a mix of Colombian and Capetonian blood, the Latin American Fiesta is here!

Master of staging creative Guerrilla performances through the guise of the most acclaimed Commander to ever lead the Royal Corps, the renowned advisor DJ InviZAble is a mythical being who travelled from a distant highland tribe and has been on guard at the front line of the freedom group known as Gazelle. Now the advisor has taken to the podium with a revolutionary DJ performance to protect the Real World against dark forces. Relying on his trusty AX synth and the latest in audio hardware weaponry to defeat Anarchy, he combines laser sharp keytar solos with explosive dance moves. DJ InviZAble does not fight the forces of Anarchy alone. Teaming up with his most trusted Comrade, The Computer General, there is no dance floor left undefended.

South African singer/songwriter Manny Walters may describe his sound as ‘electric rhythm & blues/garage soul.’ Influenced by greats such as Bob Dylan, Nina Simone, Marvin Gaye, Tracy Chapman and Sly Stone, Walters delivers his socially conscious and intelligently poised lyricism with the kind of passionate, soulful intensity that is as timeless in its ambition as it is inspirational in its contemporary appeal. Having just released his debut EP with bassist Robert Scott and drummer Asher Gamedze, Walters is the kind of emerging artist who will readily find favor with those who desire music that appeals to the conscience just as easily as it satisfies the soul.

Ben Dey and the Concrete Lions is an Afro/Indie pop-rock band from Cape Town. With their single “Easy Love” recently making the 5fm New Music Nation playlist, this dynamic trio are not wasting time in finding their spot in the local music scene. Co-founded by Ben Dey (vocals) and Ongoma Mona (guitar) in 2015, they are joined by the percussionist, Alex Birns. Their fusion of local and international sounds creeps into your bones and makes you want to move – an experience that not only fills your heart and mind, but brings an energy that is so addictive it fills every fibre of your being.

The Liminals draw inspiration from a melting pot of styles and flavours and combine their dynamic stage presence and eclectic tunes to create an effortlessly memorable performance. Comprising of the wildly energetic front man Aviwe Sikile, Dylan Fine on lead guitar, Angus Hardcastle on bass and Mitchell Davies on drums, the band is widely known for their signature sound – a fusion of funk, indie-rock, jazz, blues, various african styles and even ska. 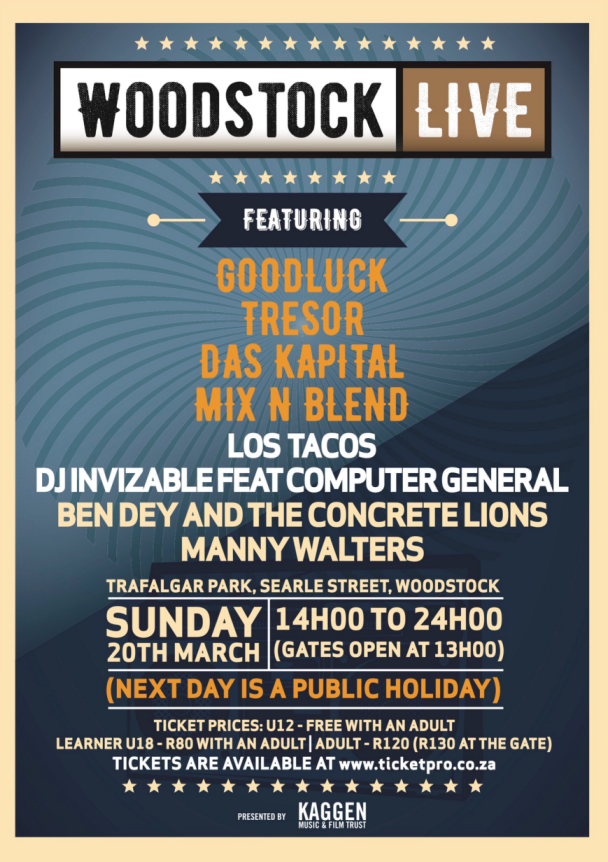 Tickets are available at http://www.ticketpro.co.za/ from Tuesday 1 March:

Children under 12 (accompanied by adult): FREE

Christopher de Vries, The Kaggen Music and Film Trust says: “As a collective we acknowledge the past and celebrate the evolution of Woodstock, striving for an inclusive approach between creative industry, local residents, businesses and communities.

Our business model for Woodstock Live is based on the social enterprise model.

Our first objective is to develop a sustainable model over a term and then following this phase we will aim to develop a profitable series of events.

Some of the proceeds from the series will be then be allocated to social beneficiary projects. The Kaggen Music and Film Trust, together with our social outcomes partner, The Big Issue, http://www.bigissue.co.za, will be the advisory team, responsible for the distribution of the projected revenue. We are also exploring additional areas of collaboration as we develop the partnership, for example skills share, staffing, training and music collaborations.”

Jessica Schnehage, project manager for Woodstock Live: “Woodstock Live encourages collaboration and emphasises the importance of bridging divides by bringing different cultures and genres into the same creative space. We are inspired by individuals who embrace their own individuality while contributing to those around them.”