We left town, cooler boxes stocked, psytrance blearing from the speakers; chocker block with some of the best conversation, energy and amped-ness a car could ever ask for; travelling somewhere en route to Caledon, some 100 km’s later, with nothing but a neon-pink heart -sign to guide us in the dark, we had arrived… in Utopia. Literally!

With no time to waste we suited up (it was severely cold once the sun went down, ’til you got to the floor anyway), filled our juice bottles and headed straight for the DF. The energy was electric… The sun had gone down, the huge-ass moon up and the freaks out. In full force!  Though we had unfortunately missed the Streisand Brothers debut, we basically didn’t miss a beat ‘til the next day when the music ended. There was no sleeping occurring if I had anything to say about it! It was the Love Project and we were going to spread ours as much as possible. Neon hearts, lazer faces and dazzling visuals surrounded us as we warmed up to the likes of Sterealky and Satori but it wasn’t until EMP came on that shit got real!  His tunes and (avid hand/arm manoeuvres) blew our minds so much so that there were really bad images to prove it- trance faces are some the most happy, but sometimes, the most unattractive. What did we care, though? We were here for a killer time. 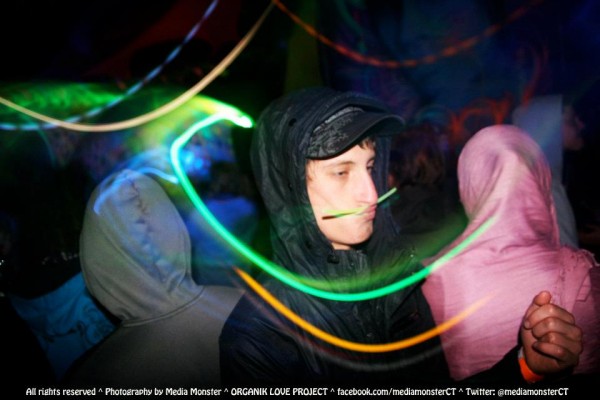 The madness continued on stage – from Cybernetix (happy birthday Warren) to Xatric to Bruce and, as the sun started to show its gorgeous face once more,  handfuls of Sunday stompers arrived, ready to go! I recall a sick set from Plusminus to what was definitely the second most memorable performance of the party: Broken Toy!  Wow, dude. Seriously!? An amazing show that got everyone so revved up that it was almost ridiculous. The beats just got bigger and badder as they went along- on and off the floor. Where ever you went, whether to the loo, to the car for a refill or just for a stroll, there were beats blearing non-stop. The stomping got more impetuous as you moved further back and the head banging more incessant nearer the stage. There were the front-right-stompers and the front-left-skippers, the through-the-crowd-runners and the always-at-the-back-on-their-own-mission cats. But no matter where you preferred to dance or whether you knew the people who jammed alongside you, they were your friend and it was going to stay that way ‘til the end- a sad end it was when Regan walked off stage, I might add.

It was a party where the hugging was unbreakable; papsak’s were being shared everywhere; the red telephone came out to play; bubbles were blown constantly; hula’s were hooped; faces were painted in neon; bodies were caked in mud; funny outfits, glasses and hats were worn; smiles were extensive and laughter was contagious. The Love Project– a perfect name for a perfect party. Small though it was, it was certainly the best way to end off a season. Let’s see if the “official” last party on 26 May can live up to it. Psycho Stomper, we are ready for you!

Thanks to the DJ’s, Warren and the rest of the Organik organisers, Jess for the rad pics as always (to see more follow the link), my amazing mates that came with me and the new ones I made.